When it comes to the battle for the glitterball, this year’s leading contenders have backgrounds as different as an elegant waltz from a sexy salsa.

One grew up in the U.S. and has dedicated three decades of her life to the performing arts. The other hails from Bedfordshire, used to work on the perfume counter at Luton airport and says she never had a dance lesson before starting Strictly Come Dancing.

Yet it was trained dancer Ashley Roberts —initially the bookies’ favorite to win Strictly — who unexpectedly found herself in the dance-off last weekend.

Despite high scores from the judges, the public were put off by her dancing proficiency, which meant she had to compete against ‘dad dancer’ cricketer Graeme Swann to stay in the show.

‘It is a fierce competition! I just want to say how GRATEFUL I am to be able to make it through,’ she said.

Meanwhile, novice dancer Stacey Dooley had her best week of the competition, scoring a near-perfect 39 points for her Paso Doble.

A favourite with fans, who like the TV presenter’s down-to-earth personality and ‘dance journey’, she is now the 11/10 favourite to scoop the glitterball trophy on December 15.

So what is the truth about the rivals — who are said to get on well off screen — and who will triumph? 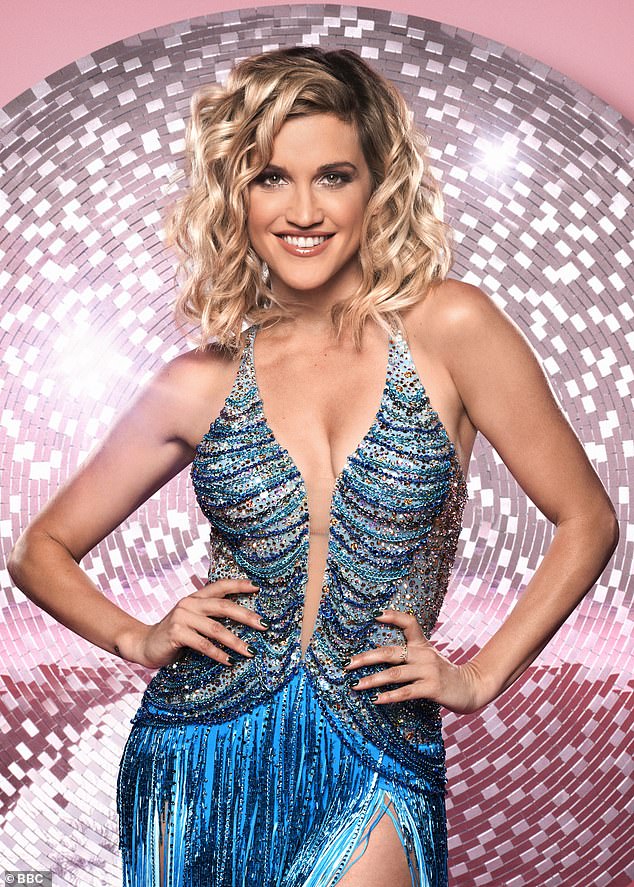 She’s a star: It was trained dancer Ashley Roberts —initially the bookies’ favourite to win Strictly — who unexpectedly found herself in the dance-off last weekend

Ashley was raised in Phoenix, Arizona by mum Peggy, an aerobics and Pilates instructor.

Her dad, Pat, was a rock drummer. Before Ashley was born he lived with Leah Kunkel, the sister of Mama Cass of The Mamas & The Papas, and played for the band. He divorced Peggy when Ashley was young and later worked as a car dealer.

Pat killed himself this year, aged 69, after what Ashley described as ‘a long battle of physical and mental health’. She dedicated her emotional Contemporary dance to him earlier in the series. Brother Jayce was diagnosed with schizophrenia in his teens and lives in a care home. 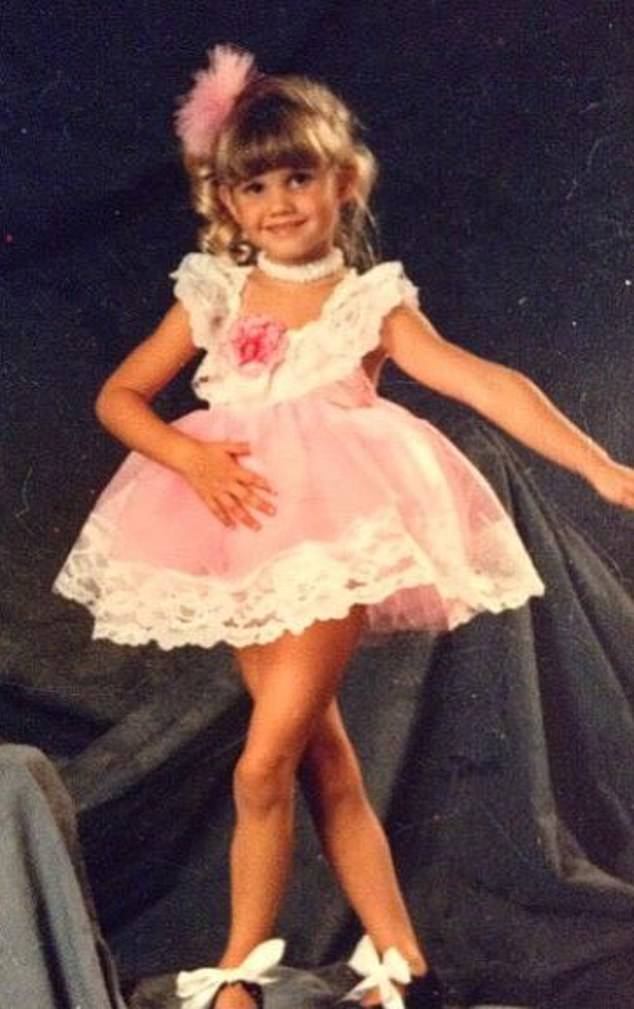 While other contestants, such as previous winners Joe McFadden and Caroline Flack, have had dance training, unlike Ashley none had actually made their principal living from dance.

The BBC website describes her as a ‘pop star and TV presenter’ but she is in fact a professional dancer who went on to do TV and singing work.

She always wanted to be a dancer and started dance classes aged three. By the time she was eight she was attending the Bender Performing Arts centre in Phoenix for 12-16 hours a week.

Owner Kevin Bender told the Mail that young Ashley was ‘the cream of the crop’. He said: ‘Even from a young age she always had a strong stage presence and the ability to draw people in.’

The dance classes, which she took until she was 16 years old, focused on ballet, jazz, tap and hip hop, with modern dance added in for the older students.

Kevin Bender added: ‘When you are classically trained as a dancer we focus on the four genres because you can pick up a lot of things as you go’. He says he didn’t train her in Ballroom or Latin dance, though.

Ashley would go to dance conventions and win summer scholarships, says Kevin, ‘which is professional training’.

Meanwhile, Ashley tries to play down her dance background: ‘What I’ve done was booty popping and I don’t know if there’s booty pops in the Tango.’

She also danced in videos for the song Accidentally In Love by the band Counting Crows, and in a pop video for the singer Pink.

In 2003, the Pussycat Dolls were ‘recast’ to include girls who could also sing, and turned into a pop group. They sold 50 million records before splitting up in 2010.

Ashley gained a foothold on British TV after coming second in I’m A Celebrity in 2012. From there she was cast as a skating judge for two seasons of ITV’s Dancing On Ice and was a regular performer on Ant and Dec’s Saturday Night Takeaway until 2016.

A solo singing album in 2014 was a disappointment, peaking at No 159 in the charts.

Recently she has appeared on TV game shows including Tipping Point and The Crystal Maze. She now lives in London because she is a bigger star here than in America, and appeared in an ad campaign for Matalan for which she was paid around £150,000. She is said to be worth about £1.5million.

Currently single, her last serious romance was with dancer Kenny Wormald and ended in 2011.

She and Declan Donnelly have both denied reports that they had a fling after I’m A Celebrity finished in 2012. Last year she was spotted flirting at a party with Brooklyn Beckham, then aged 17, after the Brit awards. Recently, she has been linked to Strictly pro Giovanni Pernice (paired this year with Faye Tozer) but claimed last week that they are ‘just friends’.

Ashley is paired with hunky Pasha Kovalev, who has been dating Countdown’s Rachel Riley since they were partnered in 2013. By all accounts they get on well. He calls her ‘buddy’, she says he is ‘the best’. She tells her 355,000 Instagram followers: ‘I have learned SO much!’

She scored a perfect 40 for her jive in week nine, at Blackpool, with judge Bruno Tonioli saying she had earned a place in Strictly history. Last weekend she scored 36 points and got the highest marks for the Lindy Hop-a-thon group dance — but ended up in the dance-off because she had polled the fewest votes from the public. Her average score is the highest of all the competitors: 35.7.

Even her worst isn’t bad. She and Pasha scored 29 for a Viennese waltz in week one.

The bookies did have her at 3-1 favourite to win the show, but she is now placed fourth behind Stacey, Joe Sugg and Faye, at odds of 12/1.

Raised in Luton by mum Diane, Stacey was born with a heart murmur, which was monitored until she was five.

Her father left when she was two-and-a-half. He tried to return to Stacey’s life when she was 13 but it was ‘too late’ for a reconciliation, and when he died not long afterwards they were not close.

She said: ‘I don’t ever think, poor me, I just feel blessed I had my mother.’

Stacey went to Stopsley High School and left at 16. She worked in a hair salon called Shed Head, waitressed and had a job at Luton airport selling perfume. 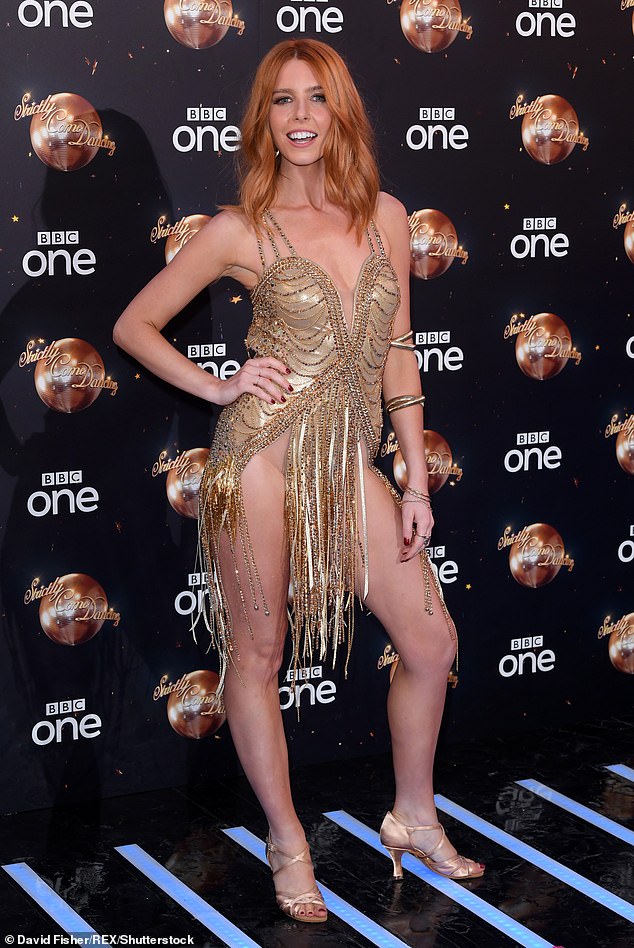 She says she has had none, and her name seems to ring no bells at any of the dance or theatre schools in and around Luton.

Instead, she is an enthusiastic amateur who has always loved dancing at home and in nightclubs.

She said before Strictly started: ‘The thing about my dancing is, I actually think I really look the part. Everyone else around me is like, “You’ve got to be joking. You’re so erratic, really over the top, and you’ve got no rhythm”, so it’s a bit of a split jury.’

Seven years ago, Stacey and her mum went to Strictly as fans to cheer former footballer Robbie Savage.

Fame came after Stacey responded, aged 20, to an advert for fashion-conscious young women to appear in the 2008 BBC3 documentary Blood, Sweat And T-Shirts.

She went to India and was horrified by the child labour and acute poverty in sweatshops, crying on camera.

Back in the UK she campaigned against child labour and appeared on Newsnight. The controller of BBC3 then took a chance on Stacey and cast her in her own documentary.

A natural on TV, she fronts Stacey Dooley Investigates, which has run for 11 series, tackling sex trafficking, women’s prisons, Muslim extremists in Britain and child sex exploitation in Japan. She also went to Iraq to film Face To Face With Isis for BBC3.

She released her first book, On the Front Line with the Women Who Fight Back, in February and received an MBE for services to broadcasting in June.

When she started Strictly she said: ‘It’s important that I’m very straight and serious in my documentaries but that’s not my whole persona.

‘It’s nice to be able to enjoy the lighter side of life.’

Stacey lives in Brighton with her boyfriend of three years, Sam Tucknott, and their bulldog Bernie.

Sam, 30, is a personal trainer and as a teenager was a semi-professional footballer at Crystal Palace Academy.

Stacey says: ‘I’m starting to think I’d love a family but now is not the moment. I’m enjoying my job so much.’

She is paired with Kevin Clifton and they get on like a house on fire. She says: ‘Whatever happens, I’ve made a pal in Kevin.’

Stacey calls him ‘King Kev’ and tells him on Instagram, where she has 408,000 followers: ‘You are a diamond.’

Their highest score yet was last week, when they got 39 for their Paso Doble. Stacey crowed on Instagram: ‘We did it! We got to grips with the blaaaady Paso!’ Their average score is 31.7 points.

Stacey is the bookies’ favourite to scoop the Glitterball Trophy, at odds of 11/10 on. She has signed up for the Strictly tour but will be partnered by Aljaz Skorjanec, as Kevin is playing Stacee Jaxx in the West End musical Rock Of Ages.

YouTube star Joe said he had ‘never danced sober’ before beginning his Strictly ‘journey’ with pro Dianne Buswell. He has come a long way from his low scores of 26 in weeks three and four, and achieved 38 for his Quickstep at Blackpool. Although his average score puts him fourth, he is second favourite to win according to bookies, at odds of 2/1, because of his strong fanbase. He has never been in a dance-off. 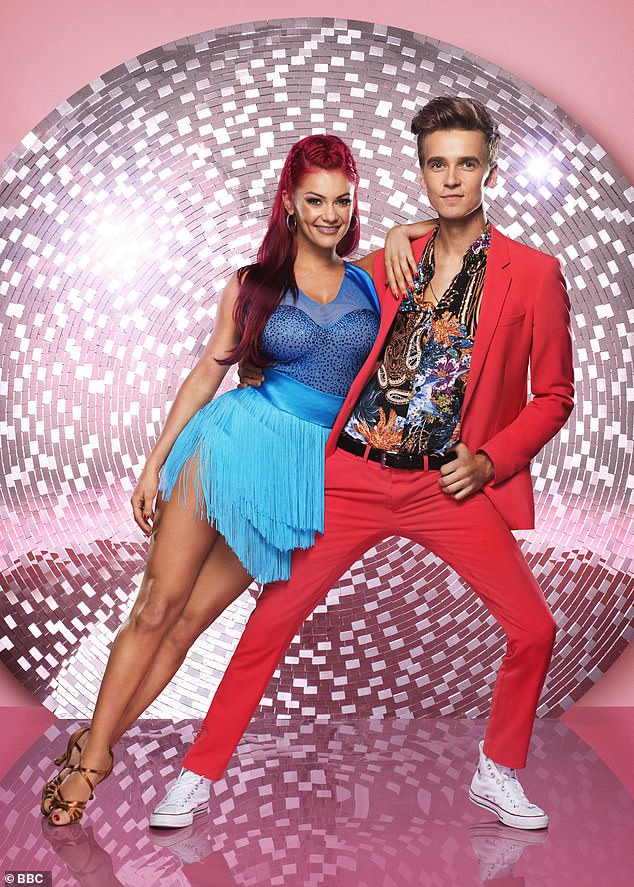 Former Steps singer and trained dancer Faye has been a consistently high scorer in the competition with partner Giovanni Pernice, with an average score of 34.8. Her best dances so far were in the Jazz couples’ choice category — to Fever, by Peggy Lee, in Halloween week — and the Waltz last weekend, which both scored 39 with the judges. She is considered third favourite to win by bookies, at odds of 10/1. 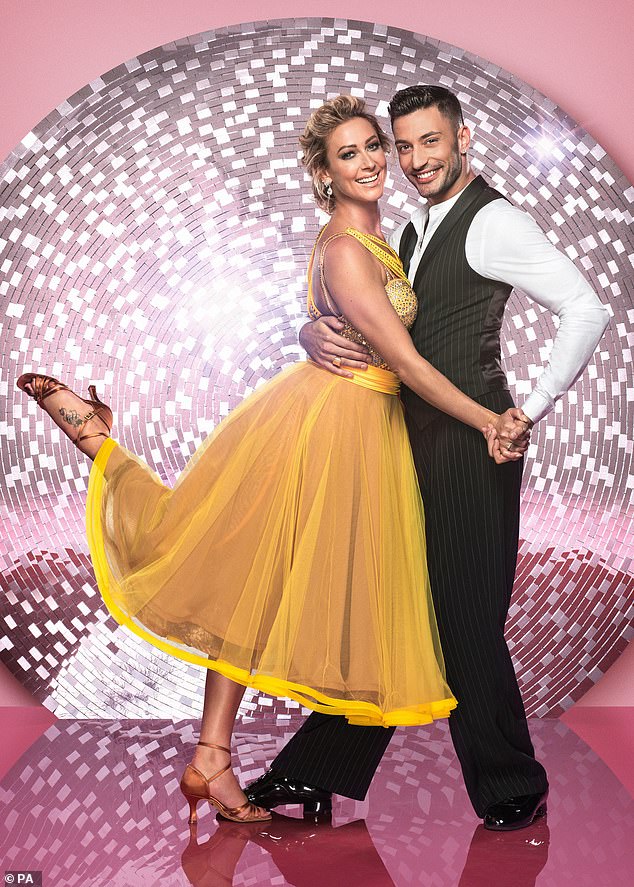 Paralympian Lauren has been paired with popular pro AJ Pritchard, who mortifyingly nearly dropped her in the preview show. They are second favourite to be the next couple eliminated and have a modest average score of 25.8, the lowest of the remaining couples. Their worst week was the Cha Cha Cha to Fame, which scored 20; their best a Viennese waltz that scored 34. 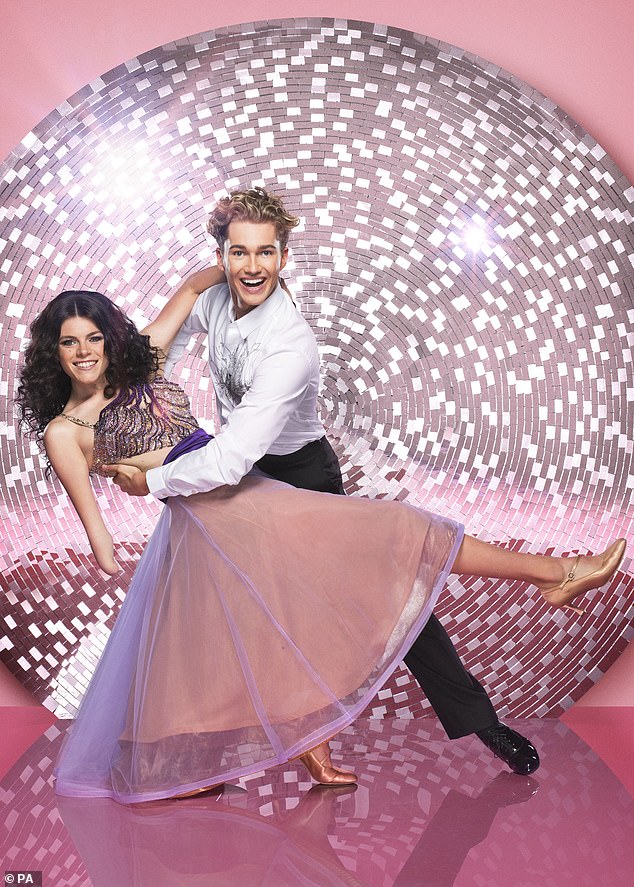 Actor Charles Venn is the comeback king, having survived three dance-offs with partner Karen Clifton. He has scored only 25 points five times in the competition but really showed he could move with his Street Dance in week five, getting 36 points, and achieved his best score of 38 for the Samba in Blackpool. 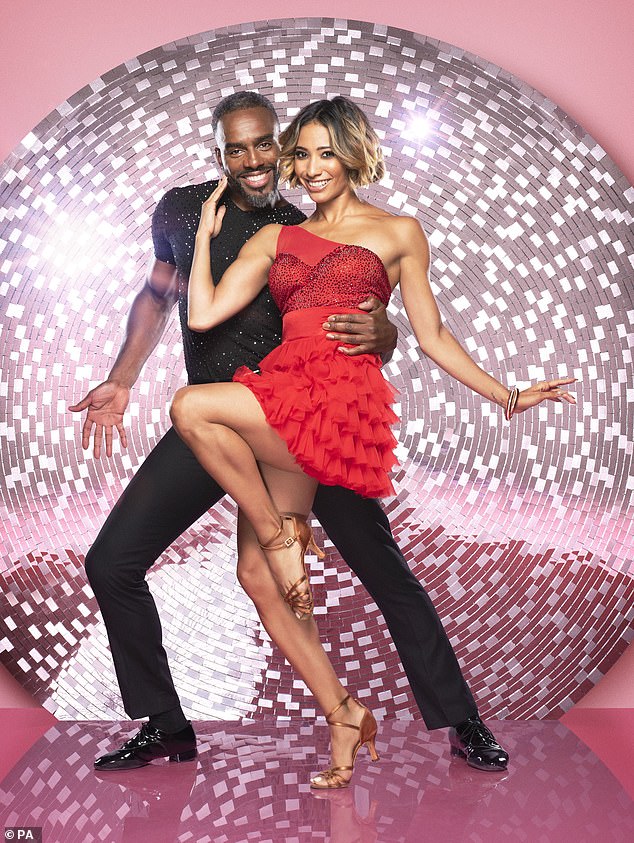